What is the best Non-lethal Self Defense Weapon?

“That’s NOT pepper spray! What was that!”

That was the repeated cry of a guy on his way to jail, high on PCP, who thought NOTHING could take him down, until he jumped on top of a police car and beckoned all comers, screaming “Come and get me mother _ _ _ _ _ _!”

He was probably right. Nothing other than a bullet would have taken him down, but a TigerLight, like kryptonite to Superman, totally incapacitated him with one short blast.

Why did he think it was not pepper spray? Because he had been sprayed before and this time was a whole new experience. Why did this non lethal option never fail, while the department’s police strength belt carried spray failed to stop, over 50% of the time?

The New D.A.D. has capabilities never before possible, thanks to Bluetooth/GPS technologycombined with a powerful, innovative app for iPhones and Android phones and the most powerful hand-held, non-lethal self defense weapon in existence, at any price. 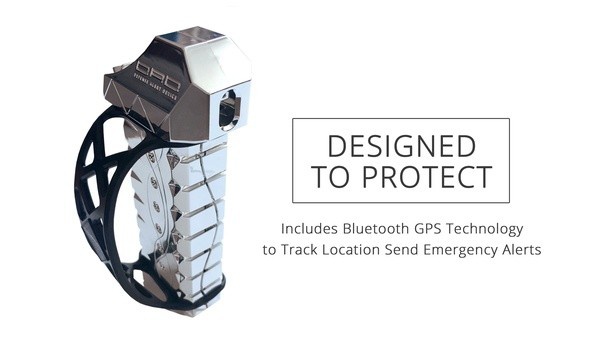 Using a uniquely effective, patented design including a Bluetooth chip, blinding light and military strength chemical agent (OC) originally developed for police and military operations and extensively tested for human effects at Aberdeen Proving Grounds and on the street, previous TigerLight® Non-Lethal Defense Systems were the basis for the development of the D.A.D.™ (Defense Alert Device).

In actual field tests, previous TigerLights yielded the highest documented “stop rate” in the world at 96% without injury to the subjects. See Report On LASD Study at Non-Lethal Weapons - Self-Defense Weapon - Tigerlight or find it here: Non Lethal Weapons Study. 2012 TigerLight, Inc. delivered a White Paper to the U.S. ARMY for the development and possible use of a TigerLight® that included, among other capabilities, real-time signal transmission from the device, sending the GPS location and real-time video to remote command posts.

Michael H. Teig, TigerLight CEO, began work on a non-military version that his wife and seven daughters could carry and operate. It would not only have the best non-lethal stopping power of previous TigerLights, but would be smaller, lighter, stunning in appearance, inexpensive, very comfortable to carry, unrecognizable as a non lethal self-defense weapon and able to send “I’m In Danger” alerts to those able to respond the fastest.

That capability to send an alert to anyone within a mile who has the D.A.D.™ app, regardless of whether or not those people are in the sender’s app contacts, makes this device the most important device in the history of personal and public safety. is a capability referred to as “Crowd Alert™.” Crowd Alert™ gives the user the ability to directly contact hundreds, even thousands of individuals who just happen to be in the area. One little push on the button of the device sends an alert signal from the Bluetooth chip in the device to the user’s cell phone app that they have on their person. The app on the cell phone then distributes the “I’m In Danger” alert via the app, to the text, email and app of anyone in the app contacts at any distance, but more importantly, to anyone with the app via Crowd Alert™, if that person is within a one mile radius of the person in danger.

The photo, name and location of the person in danger is seen by potentially hundreds or even thousands of people on their cell phones who are in close proximity to the person in danger or needing help for a variety of reasons. The people receiving the alert have essentially agreed to be “first responders” if they happen to be in the area when someone in danger sends an alert.

Imagine a student walking to her car and she is approached by someone with ill intent. She shines the light at the bad guys and discreetly sends an alert to 5,000 students who are very close to her location, many of whom saw her just a minute or two before. Hundreds of students, including campus security, run to her aid. If she needed to use the non-lethal force provided by the device, she will have done so and the individual will likely be incapacitated when people “first responders” begin arriving.

Not only is she able to stop an attack or potential abduction, but 100 people, many with the same device, others with the app only and others still with neither the device nor the app but who received the alert via text and email because they were in the girls D.A.D.™ App contact list, can be there within seconds.

These potentially massive numbers of “first responders” will not only put fear into the minds of criminals, but those criminals will be far less apt to get away to commit the same crime against someone else. Never before has the public had access to such power to protect each other.

Here are some key additional facts to take into consideration:

The University of Utah did a study on pepper sprays and found that all the commercial sprays tested, except two, had actual potency levels far below the advertised level, some as bad as 1/100th the claimed potency. Others varied greatly from batch to batch. So, you have to be VERY careful about which spray you purchase.

The spray pattern and particle size also have a significant impact on actual effectiveness. Although a stream, gel or foam spray pattern is not as affected by wind blowing the wrong direction, they are more difficult to hit a moving target with and are not nearly as effective at incapacitating the attacker in a close proximity, violent attack, which is what most attacks are. Incapacitating the attacker is the first priority, by far. TigerLight has used all major brands and spray patterns used by police departments and has been a great clearing house for spray effectiveness the last 15 years or more. The two brands being used in TIgerLights, Guardian PD and Sabre Red, are the brands used by the majority of D.O.D. agencies and major departments.

There are two ways pepper spray incapacitates an attacker. One is sheer pain. The other is respiratory effect. Think of an MMA fight. Two fighters can inflict tremendous pain on one another with hundreds of punches to the face and still fight on. However, a good choke hold, momentarily depriving the opponent of oxygen, will quickly incapacitate the opponent, causing them to “tap out.” There is no greater human desire than the desire for oxygen. Herein lies the greatest advantage that the D.A.D.™ and all TigerLights have had when it comes to incapacitating a violent attacker.

You will often hear that pepper spray is not very effective on subjects on PCP and other pain deadening drugs. This is true, WITH MOST SPRAYS. However, this is NOT true with a TigerLight as evidenced by its 15-year performance record showing a stop rate of 96%, far higher than any other spray or any other non-lethal device. TigerLights used at departments with “stop rates” below 50% due to a high use of PCP in the area, experienced stop rates at the same department, over years of use, of over 96%. There is a difference, a very significant difference.

Whenever someone is evaluating the merits of pepper spray “Blow Back” is always discussed, as it should be. However, while it is an important thing to be aware of, it is way over-emphasized as a “weakness” of pepper spray. I say that based on the extremely high success rate of TigerLights, using pepper spray and the nearly zero impact “Blow Back” has had on those results. Not one time has an officer reported being incapacitated by the spray or “blow back” being the cause of a “failure.”

The point of all this is that if you are going to evaluate your options for self defense, one option should not be judged on the merits or lack of merits of other “similar” options that may be different in tremendously significant ways, as is the case with the D.A.D.™

There is no one thing any of us can do to guarantee our safety. Mental awareness and good decision making, including avoiding obviously dangerous environments when possible, taking self defense classes and having a “plan” if all attempts to avoid danger fail, are all important. However, one fact remains and that is this:

If the attacker has the ability to overpower you and force his will upon you, then you are at the mercy of the attacker. For a huge percentage of the population, a “force multiplier” will often be necessary, even for those who have taken self defense courses, which I think everyone should take because they will help in a number of ways, especially when combined with a device like the D.A.D.® 2, the best non lethal option on the market.

When little, 120-pound Whitney Zach was about to be assaulted by a male, nearly twice her size and strength, she was able to overpower or incapacitate him with a TigerLight. He thought it was just a light until it was too late. In his case, the pain was likely a factor, but the respiratory distress, causing him to gag violently and puke repeatedly, was likely more of a factor.

She had not done anything wrong. She had not been careless. She stopped at a gas station for gas and to use the restroom, which was on the outside. The police officer who arrested the attacker told her she was “very lucky.” It would have been luck, or a miracle, if she would not have had a TigerLight and would have gotten away. In her case, it was lucky, or a blessing, that she had chosen a self defense toolthat she was able to use effectively and successfully, even without extensive training. Training would certainly make her more prepared to overcome a greater variety of situations, but ease of use is a huge plus because high-stress and fine motor skill impairment can spoil the best of plans.